Recently I picked up The Making of Prince of Persia: Journals and was delighted to see Jordan's approach to tracking his progress: 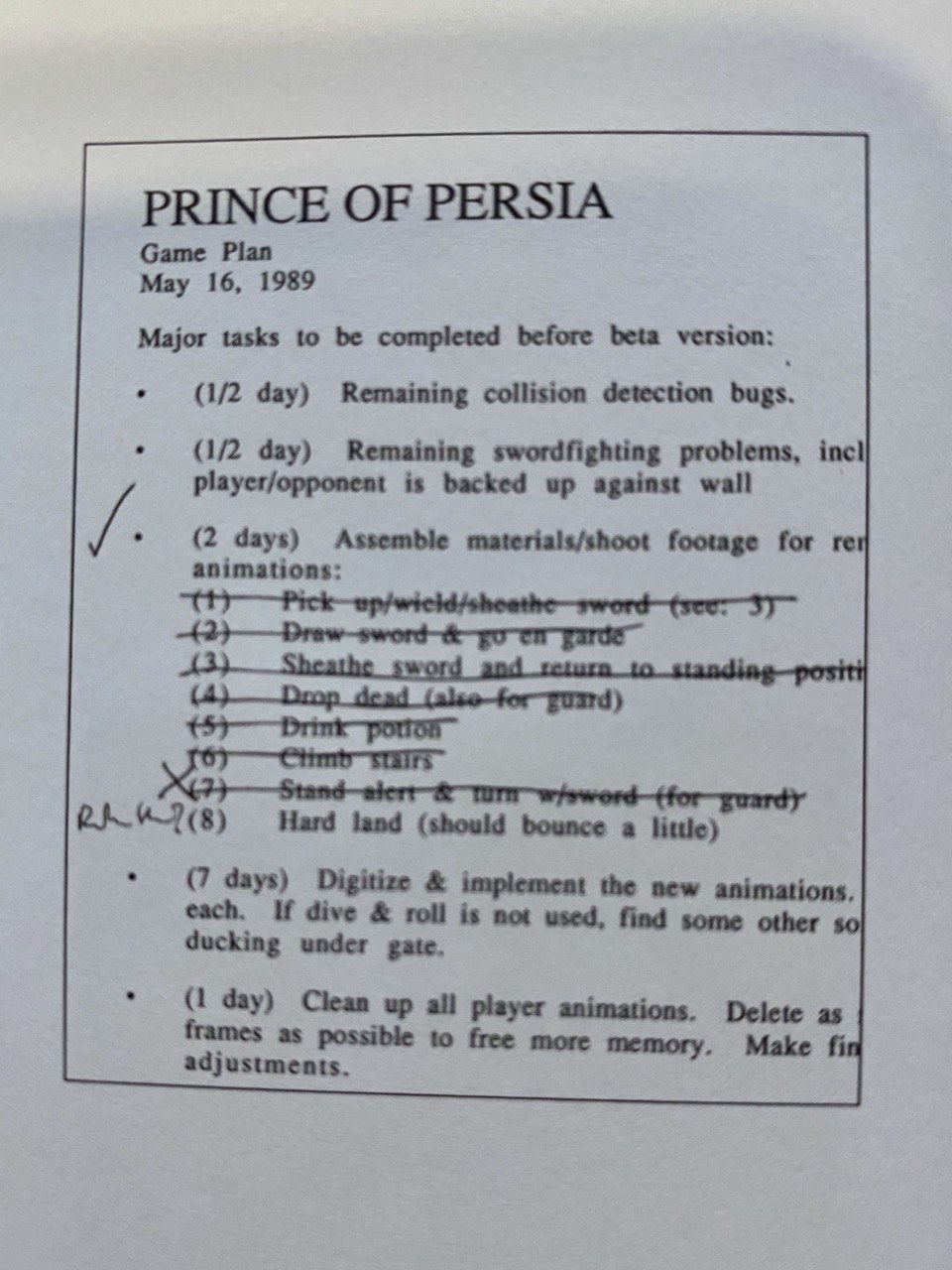 This was the mid-80s. A time when tools like Notion, now valued at $2 billion didn't exist. Notion's value comes with its collaboration and all-in-one feature set, and I can't deny its usefulness for teams. But there's an elegance in keeping it simple, especially when the focus is myself (Notion does have fun emojis, though)

Let's review what we see in that image of Jordan's task list:

Jordan was in his early twenties around this time but his age does not diminish the effectiveness of this approach. In between getting the game done, he procrastinated, struggled, moved around, and did all the things that would make it difficult for a human to re-focus on a task.

Let's take a look at a couple more examples: 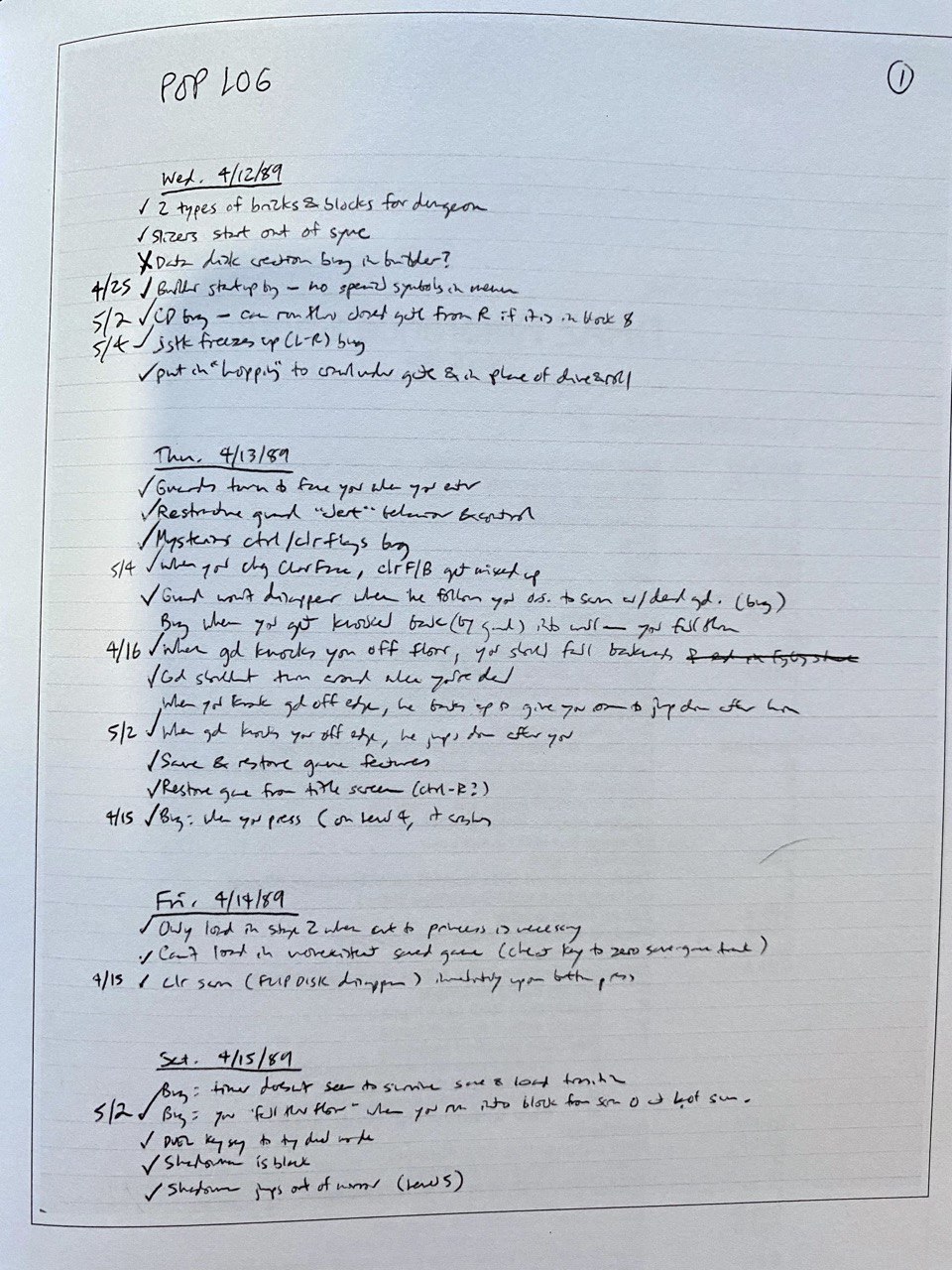 At a glance, some of this looks like a disaster (and perhaps Jordan would look back and agree). Inconsistent approach, scribbled, seemingly rushed writing.

Throughout the book we'll find more images of the Prince of Persia task list. Accompanying these lists is his journal which is represented as the book itself. Jordan took the time to write on a regular basis even when grinding 70-hour work weeks.

The journal meant Jordan was writing on a regular (nearly daily) basis. Writing, even when it's in its rawest form, can be difficult. As an aspiring writer myself, I've seen that with practice there's reduced friction to getting my thoughts out. Journaling as a means of boosting productivity has potential, if not to improve one's ability to deliver concise and structured thought, then at the least to unleash a bit of creativity!

My task list is a single text file per focus (I separate them between a few high level projects in career and life) and it's prone to being as raw and unstructured as Jordan's, generally with this structure:

Now there's a few important things that make this work well for me.

First, how do I handle long-running tasks? If a task on the week of June 8th is not complete, what happens to it? To let it sit in place and fall down the list as the weeks go on would mean it'd eventually be forgotten. I also don't want to scroll through a lengthy task list to find active work.

So at the end of each week, I groom this list, pushing unresolved or incomplete items from the previous up to the new week. But! That's prone to issue as well, we could easily see the eventual list becoming an unmanageable mess.

This end of week process is where I can get rid of some debt too. What was deemed important three weeks ago may no longer be the case, through various natural means. If ideas keep seeing inaction, I question their value and may throw them away -- the good ones will naturally creep back up, perhaps in a more evolved form. The list will shrink and grow each week and part of keeping myself in check is ensuring the list is a reasonable size.

I use the preamble under each header to remind myself how I felt and what I was thinking beyond the tasks each week. It's a low-friction action that when I look back, provides great value to me.

Although I push my lists to GitHub for posterity, I don't worry about actively syncing the lists across devices. Why? Because I separate work and personal devices, so I'm generally not in a position where I need to reference a work related list on a personal device. Articles of more substance are given their fair sync-happy treatment, of course.

This approach has worked well for me for a decade of professional experience. The approach I take today is refined from previous times, but whenever I reached to improve my productivity with a new tool, I found myself reverting to this simple and effective approach.

A mentor of mine spoke similarly when he revealed his key to productivity. A pen, paper, and the drive to check things off. It was what held him accountable and he used the same approach throughout his 40 year career.

There's room for improvement. I would eventually prefer to be able to, without thinking, create a new Markdown file in a folder, have it sync across devices, and it to be easily viewable (and rendered!) on any device. This is all possible with work, but the need hasn't shown itself just yet.

Additionally, I need to improve on journalling, which is the highlight of Jordan's book. Life tends to move incredibly fast but it has slowed down slightly during the covid-19 pandemic and makes me think how I could establish this healthy habit.

I suppose this blog post is another step in the right direction.